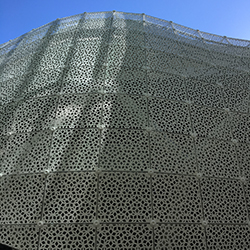 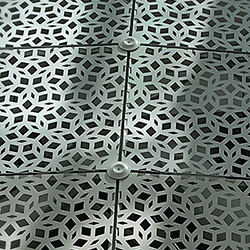 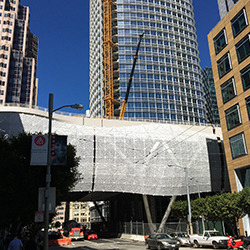 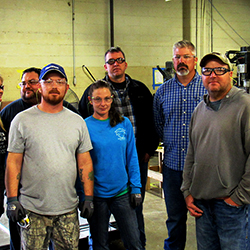 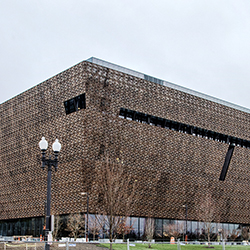 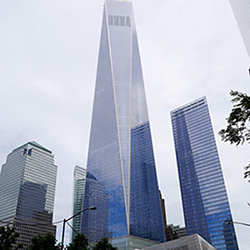 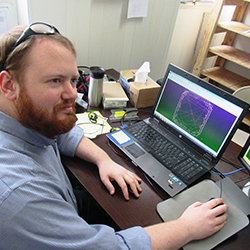 The Sky’s the Limit

If a one-of-a-kind architectural design looks nearly impossible to build, chances are that it’s made its way across the desk of Mike Graves.

“We tend to do a lot of things that other people turn away,” says Graves, plant manager and head of technology and research and development for Architectural Systems, a Missouri-based company that specializes in manufacturing parts used to build unique structures.

The company operates three facilities — in Granby, Aurora, and Monett — and offers fabrication, stretch forming, brake metal, finishing, unitized curtainwall and engineering services, as well as shop drawings, to a range of clients with varied needs.

Much of the company’s business is in skyscrapers, and it specializes in the ability to build the monoliths in sections off site so that they can be easily pieced together on location.

Architectural Systems recently completed some work on the rebuilt One World Trade Center, in New York City, and is finishing up the Transbay Transit Center project in San Francisco, Calif.

Other projects include the unique bowtie-shaped Westin Denver Airport, in Denver, Colo.; a portion of FirstEnergy Stadium, home of the Cleveland Browns, in Cleveland, Ohio; the striking Winnie Palmer Hospital, in Orlando, Fla.; the Ellis County Justice Center, in Waxahachie, Texas; the Citygate Center, in Naperville, Ill.; Millennium Tower, in New York City, and many more.

“My kids are showing their friends pictures of the things that we’re doing on social media,” Graves says. “At the end of the day, there is a great sense of accomplishment and pride in what we do.”

To tackle its range of challenging jobs, Architectural Systems has utilized the ALPHACAM computer-aided-manufacturing (CAM) solution, by Vero Software, since 2013. The software was chosen by Graves, who was tasked with selecting a new CAM solution upon joining the company three years ago.

"ALPHACAM has been a huge part of our success in the last year. ALPHACAM makes our challenging projects much, much easier.”

Mike Graves, head of technology and research and development

“We ran through testing on several different platforms and found that ALPHACAM was the best choice,” Graves says. “We looked at a few different CAM solutions and ended up settling on ALPHACAM because we wanted the ability to create macros.”

The majority of the company’s work is done in aluminum with a fleet of 22 MultiCam CNC routers that run six days a week, 24 hours per day. Twelve programmers are responsible for generating CNC programs in ALPHACAM, which the company has customized to ensure consistency and enforce standards.

As Graves oversaw the implementation of both ALPHACAM and the expansion of several new MultiCam routers, he took stock of the company’s existing CNC programming methods and orchestrated a major overhaul.

Architectural Systems uses computer-aided-design (CAD) programs AutoCAD®, by Autodesk®, and SOLIDWORKS®, by Dassault Systèmes. While the company strictly adheres to the 3D models provided by customers, it had to manually input CAD data prior to implementing ALPHACAM.

“We were having to redraw everything that we received from the customers, and we wanted to import 3D models that could be automatically converted to CAM,” explains Graves. “We have customers who send in everything from CATIA® (Dassault Systèmes) files to STP files — and Alpahcam has the ability to import those natively.”

In addition to eliminating the need to redraw projects, native translation ensures that design integrity remains intact during the importation process. Alpahcam offers import options for DXF, DWG, and IGES files, as well as a variety of other solid model formats to ensure compatibility with a wide range of CAD systems.

“A mistake is not going to be caught in the field until the panel is hung on the building,” Graves says, specifically in reference to the Transbay Transit Center project. “It would cost thousands of dollars if there is a mistake, so I’m always thinking, ‘Did everything make it out the door okay?’ “

ALPHACAM has helped Graves and the ASI programming department to rest somewhat easier in knowing that they’ve created failsafes in addition to increasing efficiency and standardizing processes.

“It’s a lot of long days and nights, and ALPHACAM goes a long way towards helping to ensure that we’re using the customer-supplied drawing and computer-generated artwork exactly as it was given to us,” Graves says.

“For our industry, it’s critical that we have the native import. You have a lot of designers who use a lot of different software, and in our line of work you don’t want anything lost in translation. That adds a lot of benefit for us because we assume liability if something isn’t right.”

ALPHACAM helped Graves and his team manage the massive Transbay project, the design of which is based upon an algorithm developed by Mathematical Physicist Roger Penrose. In a nutshell, the algorithm deals in “forbidden” geometry, specifically symmetry, and the idea is that the algorithm never repeats.

Reflecting that concept, Transbay architects, engineers and manufacturers have figured out how to piece together a monumental puzzle made of hundreds of different precision pieces, all of which have unique profiles and tolerances of five-thousandths of an inch. Moreover, each piece is made to break away and hang loose in the event of a major earthquake.

“What people discovered is that if you apply the Penrose theory, this pattern using rhombus shapes, it works, and all of the parts are different,” Graves said. “This will be the largest example of it in the world.”

ALPHACAM’s ability to program complex, contoured shapes has helped meet the steep challenges faced by the team at Architectural Systems.

“Instead of having to train each programmer on what to do with each material thickness, they can use a macro to automatically do it,” Graves says. “If any feedrate or RPM combos are off, they’re covered. We can create a macro for a product that we can then modify into different sizes, so even that can be automated. I think we’ve pushed the software past its supposed limits because it’s just so modifiable.”

Likewize, ALPHACAM’s ability to perform helical interpolation, or to move with a slope, have made the company’s production process much easier than it otherwize would be. The software also helps Architectural Systems maximize the capabilities of its precision CNC machinery.

Graves also lists the ALPHACAM report-generation capability, which allows users to create “highly modifiable” reports, as one of the features that he finds most helpful.

“It translates data into highly modifiable reports that are user friendly and that supply cutting information to be used for machining operations,” he explains.

Additionally, he notes that ALPHACAM’s ability to program V grooves, or folds that create sharp corners, is another often-used feature.

“ALPHACAM has been a huge part of our success in the last year,” says Graves, who says that the company has seen annual growth of over 30% for the past three years. “ALPHACAM makes our challenging projects much, much easier.”

“ALPHACAM has been a huge part of our success in the last year. ALPHACAM makes our challenging projects much, much easier.”

Mike Graves, head of technology and research and development