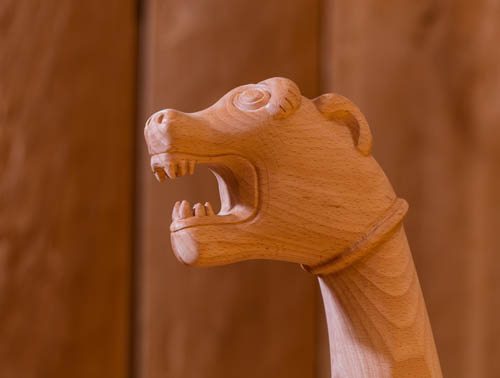 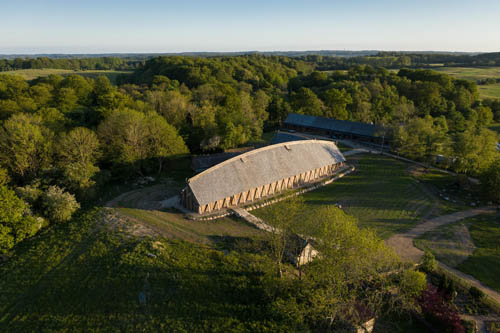 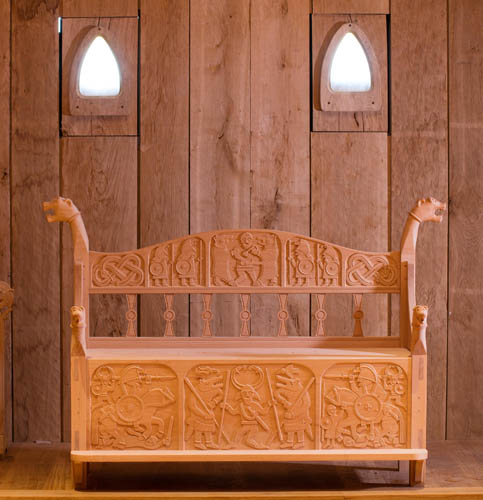 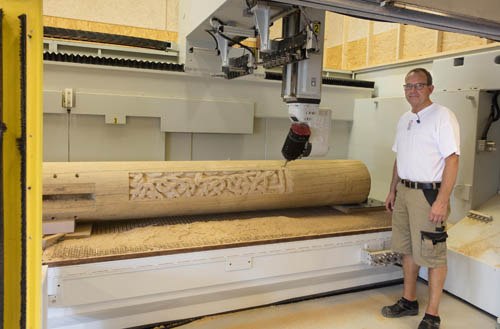 ALPHACAM software played a major role in a unique museum project showing how Danish Kings lived around 1,300 years ago.

The Royal Hall – part of the Sagnlandet Lejre, or Lejre, Land of Legends archeological center – needed around 25 pillars, doors, tables and benches to be faithful representations of how furniture looked at that time. Woodworking subcontractor Bystrup Maskinsnedkeri was tasked with manufacturing the furniture, and worked closely with ALPHACAM’s reseller in Denmark, Østjydsk CAD-CAM, to ensure the finished products were totally authentic.

Lars Holten, Director and CEO of Sagnlandet Lejre, says: “We aim to give our visitors an understanding of past life and architecture based on well-researched archaeological, iconographical and written sources. So, it was very important that our reconstruction of architecture and ornamentation was made accurately, with respect to the originals.”

He says Bystrup Maskinsnedkeri’s “innovative” use of ALPHACAM, made those aims achievable, through cost-effective advanced woodcarving carried out on modern machinery, which was hand finished by woodcarver Sanne Marie Seipelt.  The items were cut to tolerances of +/- 0.3 mm, on a CMS Ares and Fanuc Robodrill, through surface machining and full 5-axis simultaneous strategies, using toolpaths programmed and verified with ALPHACAM Ultimate.

Overall, Lejre, Land of Legends is a 106-acre archaeological open-air museum established in 1964 at Lejre, near the city of Roskilde in Denmark. It recreates typical Viking buildings showing living conditions and technologies used by the population as well as buildings from the Stone Age up to the 1800s.

Its main attraction is now The Royal Hall from the Viking Age, which measures 61 metres x 12 metres, x 10 metres high, and the reconstruction is based on the biggest building from Danish prehistory being excavated in 2009. More than 150 trees, between 130 and 210 years old, have been used for the full construction project. Among these “Navy Oak” trees which the King of Denmark ordered to be planted in 1809 after Britain took over the Danish Navy in 1807, so the country could build a new Navy. As ships are no longer built of wood, it was felt the trees would be ideal for this latest phase of the Sagnlandet Lejre project.

As well as the range of furniture and ornaments in the Royal Hall which were cut with ALPHACAM toolpaths, the software was also used to program the carving of highly intricate designs into four sacred high-seat pillars which support the roof. The pillars are each eight-metres tall, decorated with complex motifs from Nordic mythology, showing the Nordic Gods Thor, Odin, Frej, and Freya.

The decorations were created by the museum, based on original designs found in graves and excavations in Denmark, Sweden and Norway. Bystrup Maskinsnedkeri received them as STEP files, which were imported into ALPHACAM. The designs sank into the wood to a depth of 25mm, and were machined with small ball nose cutters, which were required to achieve the necessary detail.

Managing Director Niels Bystrup made his first move into the world of CNC machining with the CMS Ares 6018 and ALPHACAM Ultimate around five years ago, and expanded his workshop’s capability with the Fanuc Robodrill, which is used mainly for machining smaller components. The company handles all types of CNC contract machining and product development of stairs, doors and furniture, in materials such as Oak, Pine, Douglas, Ash, Beech, Mahogany, MDF and Sika Block.

They worked closely with Karl Erik Andersen, of Østjydsk CAD-CAM, on the best processes to produce the parts, how to program them, and which tooling to use. Niels Bystrup says: “I think the pillars and pieces of furniture we’ve made for this project will last 1,000 years – and we’re delighted and honoured to have been part of it.”

The Royal Hall, which was officially opened by Sagnlandet Lejre’s patron, Her Majesty Queen Margrethe II of Denmark, recently won the prestigious “Carpenter Award 2020” from the Copenhagen Carpenters Guild.