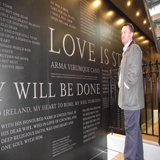 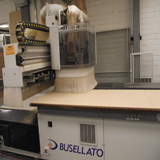 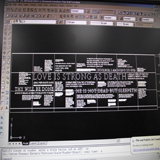 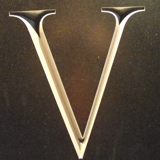 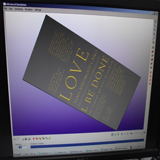 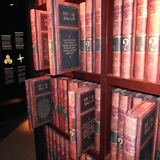 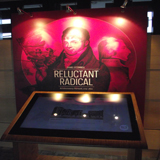 This amazing wall at the world’s first cemetery museum looks as if it is made of granite – but it is actually black medite MDF, with all the intricate lettering produced on a Busellato CNC machine driven by ALPHACAM.

“Our client was absolutely bowled over by how authentic the end result looks. In particular we spent a long time ensuring we got the tools to drop and rize at different angles to produce the authentic ‘V’ effect in the cuts. Whatever we need to cut, whether it’s a letter or particularly complex shape, ALPHACAM has always been able to do it."

The wall, which measures 12 metres by 2.4 metres, forms part of the “City of the Dead” exhibition at Glasnevin Cemetery in Dublin. The Glasnevin Trust originally considered having it cut in stone by a mason. But research showed it would be too expensive and would take around six months to complete. Using Medium Density Fibre board with ALPHACAM, the development and prototypes were completed in a fortnight, with the lettering being machined in just 14 hours.
Exhibition design specialists Martello Media asked Dublin-based Display Contracts International to produce the wall, incorporating quotes off headstones from the graves of some of the 1.7-million people buried at Glasnevin. The text was carried across from file to file over seven vertical panels comprising the floor-to-ceiling wall, and thanks to the CNC machine codes produced by ALPHACAM, it was millimetre-perfect.
Display Contracts International managing director Jim O’Brien says they looked at several types of timber and finishes for the project, before opting for the lacquered MDF board. “To replicate the headstone look, we needed the finished product to have a black background, with an etched appearance to the lettering, which, when you see it on stone, is always lighter. To achieve this effect the panels were pre-laquered before running through the CNC machine. Normally we would do the cutting before the lacquering – this was a completely different approach, it’s the first time we’ve ever done anything like this, but both Martello Media and the Glasnevin Trust were absolutely bowled over by how authentic the end result looks.”
A number of stone masons have said the wall is as good as if it had been cut in stone, if not better, because there are absolutely no flaws in it. Jim O’Brien says that was achieved because he worked closely on the cutting process with ALPHACAM area manager Michael Pettit. “In particular, we spent a long time ensuring we got the tools to drop and rize at different angles to produce the authentic ‘V’ effect in the cuts.”
The files for the Glasnevin “City of the Dead” wall came in two formats – some as Adobe Illustrator files and some as Autocad – which were imported into ALPHACAM where the tooling was applied and the CNC code generated. “It took about two weeks of development from when we saw the original picture image files, to being ready to produce the panels. The CNC code was saved onto the server from the computer where it was generated offline, and then the Busellato machined each panel in around two hours. The finished wall is exactly as Martello designed it, but it would have been impossible to do, without ALPHACAM.”
The Busellato, which was installed two years ago, was their first CNC machine, and the supplier recommended ALPHACAM as being the perfect software package for their specific needs. “Whatever we need to cut, whether it’s a letter or particularly complex shape, ALPHACAM has always been able to do it. It’s also very important for the future of our business that ALPHACAM can drive any manufacturer’s machines, because we’ll want to expand with additional machines, and eventually replace the Busellato.”
A leading exhibition contractor, Display Contracts International have worked with Martello many times, and were the natural choice to provide the solution for this unique and challenging project. Originally designing and fabricating full stands and graphics for standard exhibitions across Ireland, Europe, the Far East, Middle East and Russia, they also build the stands on-site and dismantle them after the exhibition. Their graphic work led to them expanding into providing semi-permanent and permanent exhibits for interpretive centers such as the Glasnevin Museum.
The cemetery is Ireland’s national necropolis, and many of the country’s greatest patriots, leaders, artists and writers are buried there, along with hundreds of thousands of ordinary men, women and children. The interpretive center was created to celebrate their lives, as part of a major restoration of the whole cemetery.
Display Contracts International also produced a number of other items for the center, including touch screen displays housed in CNC machined cabinets, and pull-out books where ALPHACAM was used to make the book spines from staircase handrails.
Interpretive centers are gaining popularity as new-style museums often at natural or cultural sites, aimed at enhancing understanding of heritage. Other interpretive centers featuring exhibits manufactured by Display Contracts International include the Cliffs of Moher which are one of Ireland’s top tourist attractions, Blackrock Castle Observatory’s Cosmos at the Castle, and the General Post Office in O’Connell Street, Dublin.
As one of the leading brands from Planit Software, ALPHACAM is a completely integrated CAD/CAM solution for the Woodworking industry. It is used in the manufacture of many types of components, from simple routed parts to complex, 5-axis furniture components. The emphasis behind the development of ALPHACAM is to provide users with productivity, reliability, and flexibility, as demonstrated by Display Contracts International.

“Our client was absolutely bowled over by how authentic the end result looks. In particular we spent a long time ensuring we got the tools to drop and rize at different angles to produce the authentic ‘V’ effect in the cuts. Whatever we need to cut, whether it’s a letter or particularly complex shape, ALPHACAM has always been able to do it.
Jim O’Brien, Managing Director