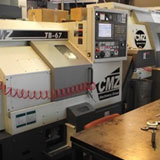 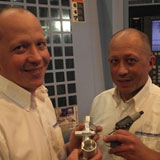 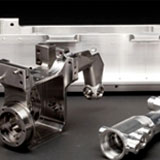 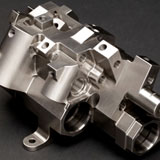 Long term partnerships with machinery manufacturers and CNC software developer ALPHACAM are two key elements that an engineering subcontractor says are vital for its continuing success.

The three brothers who run Leemark Engineering in Hayes, Middlesex, say coupling traditional engineering skills taught to them by their Father, with high-tech machinery and software, has kept customers coming back to them for over 40 years.

Having been one of the first companies in the UK to invest in Matsuura Machining Centers in the 1970s, they have kept the partnership going ever since: a number of Matsuura 3-axis machining centers and two 5-axis Matsuuras, currently handle most of their milling. For turning, they mainly use Mori-Seikis, and as part of a recent £350,000 investment in new machinery, they now have two CMZ machines, the latest a C and Y axis machine with live tooling.

Production Manager Neil Stockwell (pictured far left with brother Kevin), says three of their last four machines have been multi-axis. “This is the way machining’s going...it’s not good enough just to multi opp a component any more, parts need to be produced more economically by machining more features in one operation.” In particular, he says, aerospace components have evolved considerably by joining two or three basic parts into one highly complex item requiring advanced CNC software to produce it.

Manufacturing from solids, more than half their output is from the machining centers, but with wire erosion, spark erosion, 2-axis and 4-axis lathes they have the machine which will be absolutely right for the complexity of any component. “Because we have all this capability we can select which is the best way to produce a specific component. We don’t just have to take the traditional route...sometimes it’s better to go on to a Y-axis turning machine with its additional ways of moving the live tooling across the face of the spindle, which may be a more economic way of doing it.”

But whether they need to do a job on a Matsuura, Mori Seiki or CMZ, Neil Stockwell and his brothers Mark (the company’s Managing Director) and Kevin (Senior Programr), know that ALPHACAM will be able to produce NC code for all 14 CNC machines. “It means there are no constraints when we purchase additional machines, and this was key in our decision when we started using Licom around 20 years ago, which developed into ALPHACAM. We knew it was a dynamic software. Machines don’t stand still, they’re always developing. And with two releases of ALPHACAM every year we know we’re always going to have software utilizing our machines to their full capabilities.”

With clients from across a range of industries including motor sport, satellite communications, a leading aircraft ejector seat manufacturer and aerospace, they often work to 20 micron tolerances and 30 micron flatness tolerances, manufacturing from aluminum, aerospace steels, titanium and engineering plastics.

Programr Kevin spends most of his time working with ALPHACAM. “Our jobs mainly involve production runs of just 10 or 20 components, rather than hundreds or thousands, so I’m constantly feeding new CNC programs to the machines.”

ALPHACAM is also Leemark Engineering’s only CAD system, accurately interpreting customers’ drawings from STEP files for instance, and is used right from the initial quoting stage. Once a file has been imported into ALPHACAM he says the image is fully rotated and angled so they can see all its features. Then they take its measurements, including any small, intricate, corner radii they need to achieve, and produce the quote. “When that turns into an order we choose the face we’re using as our datums, check the features and geometries, and start selecting the toolpaths.”

There is no one particular aspect of ALPHACAM that they find more important than another. “It’s the flexibility of the whole package which is invaluable to us, because different functions are useful for different components. Sometimes we’re machining a solid model, other times it’s just for feature extracting geometries and creating toolpaths.” Once a CNC program has been created it can be post processed to any of their machines. “It’s saved on a flash card which the operator simply plugs into the front of the Fanuc controller on the chosen machine, and we’re ready to start cutting metal.”

The long-term partnerships with machinery manufacturers and ALPHACAM are two of the five elements that Leemark Engineering says is vital for its continuing success; the other three being experienced and well trained staff, effective tooling and an infallible inspection process. The company was established by the brothers’ Father, Brian Stockwell, in 1967, and he instilled traditional engineering skills into the boys at an early age; skills such as fully understanding what goes into making a component. “It’s important to look for where the tolerances are and ensure that after two or three operations they are still intact” says Neil Stockwell. “Because many of our components are so highly complex we need to think carefully about the order of machining. We can’t afford to jump in and machine something away that we might need to rely on later in the process.”

A point echoed by Kevin: “When I’m programming I always consider what’s the last feature I want to machine, what’s the last face, how I can hold it, and which features have the tightest tolerances. I work backwards through to the first thing I need to do.”

The brothers say those traditional skills, which are now largely dying out across the industry, are then put to maximum effect by using state-of-the-art software to seamlessly, accurately and speedily manufacture high quality parts for their aerospace, motor sport and satellite customers.

ALPHACAM is finally used in the companies dedicated inspection department, where measurements taken using co-ordinate measurement machines are compared to the ALPHACAM models, to ensure all the components manufactured are correct and meet their customer’s requirements.